I evoked here earlier the Valentin-Sorg Tower and the origins of the Maison Rouge (the Red House). Today, let us dwell on its more recent history and the clues at hand regarding its future…

For those of you who missed the previous installment in the series, here it is: The Maison Rouge – 1st part 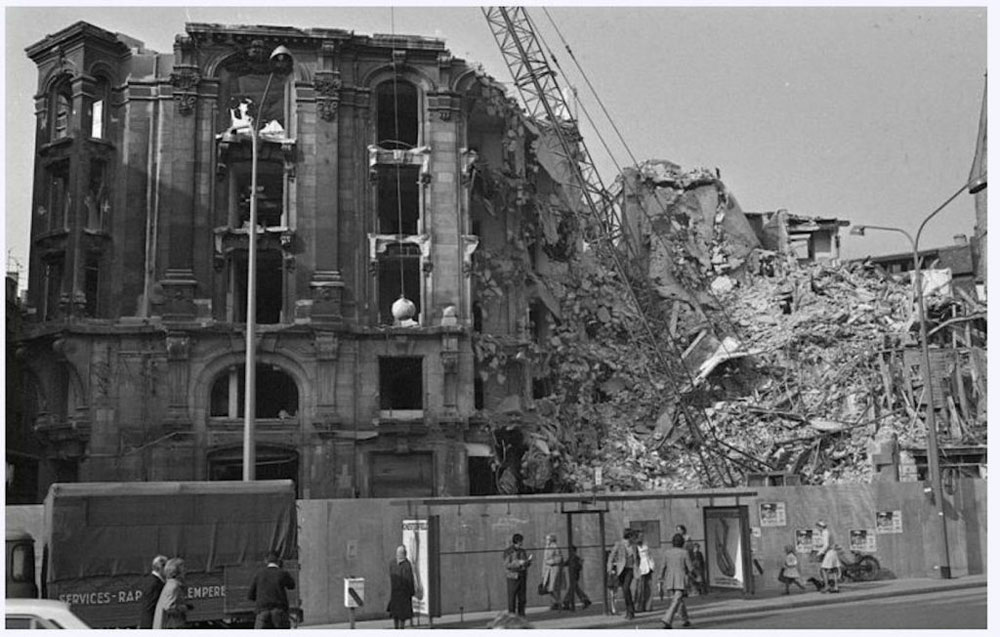 The next step in the building’s life is about to provoke quite a ferocious reaction on the Strasburgers’ behalf. In 1973, the demolition of the Maison Rouge is scheduled. It is to be replaced by a shopping center. To fully understand this decision, one must think back at the context of these times : mass consumption is coming up strong, downtown areas evolve and shape themselves around shops more so than before. Let us not forget as well that this is the car’s golden age. Back then, the Kléber square is mostly occupied by a parking lot. People used to today’s pedestrian-friendly Strasbourg would be in for a surprise! 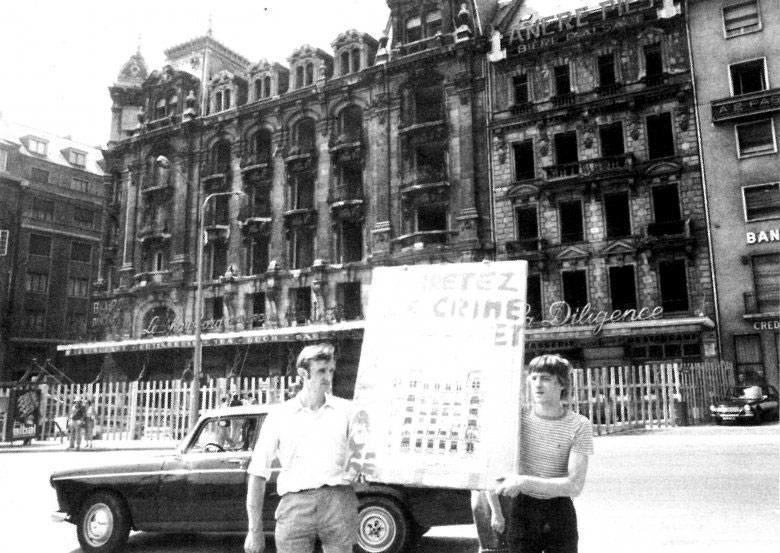 The opinions regarding the old building are mixed (for instance, some consider it “a laborious exercise in style, swollen in a wilhelminian way”). Yet, many Strasburgers have a sincere infatuation towards the old hotel, or so it seems, and they will fight for its preservation. At first, some mail is sent to the town hall. Then a protest takes place in front of the building. The city’s administration turns a deaf ear to these actions. An association is created and an application for annulment is submitted to the administrative court, all in vain.

So be it ! Just as demolition works are about to begin, some construction equipment gets stolen (400 kilograms of bolts and metallic pieces for a crane disappear overnight, if you please), some is damaged (a belt of the crane’s motor gets cut-this is decidedly a poor lonely crane). Despite this fierce battle, the demolition starts and will be completed over the course of 9 months.

Back to the future

In 1978, the new Maison Rouge is inaugurated. This is the one you can still see today on that very spot. At the time of its construction, the building is resolutely looking at the future. Nowadays, it is quite common to see it more as a retro-futuristic anachronism. And, let us be honest, for many people in Strasbourg, it is very simply “a wart”.

Yet, its architect (Mr. Herrenschmidt, the then architect-in-chief for civilian buildings and national palaces) was very likely sincere in his attempt to pay a tribute to the local, traditional architecture and the history of the area.

For this reason, the roof is divided into five parts, reminding us of the original five separate buildings. Similarly, the sloped roofs, the dormer windows (these windows that jut out of the roof and that the French call “chiens assis”, literally sitting dogs) are reminiscent of the surrounding roofs. The overhanging parts of the facade evoke the corbelling of traditional houses and the “barred” windows are a clear wink to the timbers that give its name to the so typical “half-timbered style”. Lastly, the covered area in front of the entrance, a place where to stroll, was a reference “to Strasbourg’s tradition of arcades” 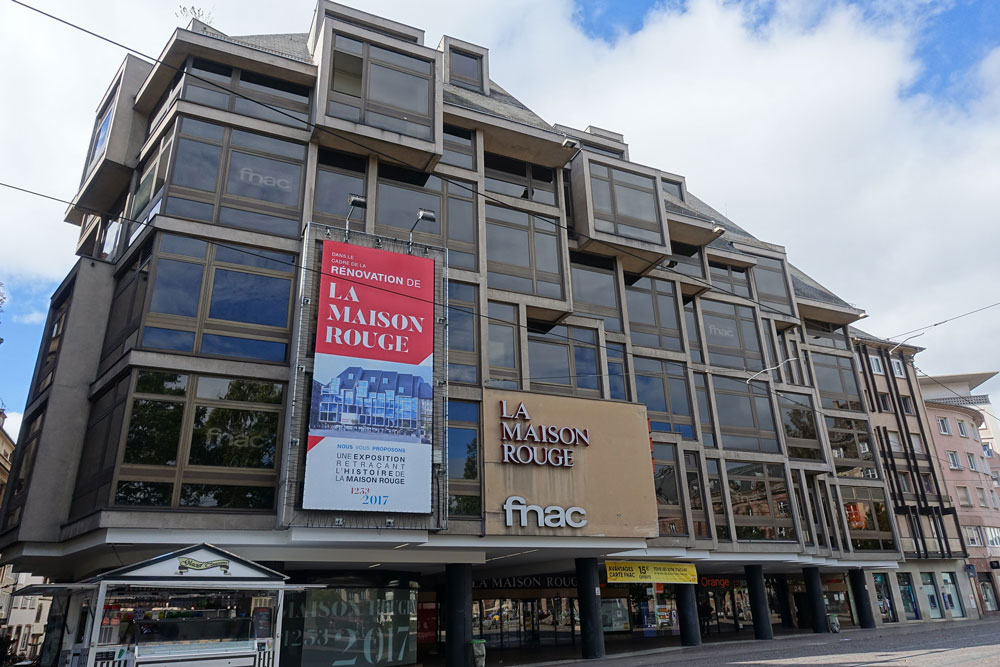 Maybe all this is not enough to fall in love with the Maison Rouge, but I think it sure is enough to stop reviling it! And who knows? Maybe sixty years from now, for its hundredth birthday, it will be the new craze? Speaking of which, would it be that destiny is about to give it a nudge in the right direction?

A (new) rebirth coming up

This overview would indeed not be complete if we failed to mention the future of the building: it is to undergo a large scale restoration. Sadly, the exact starting date of the works is not known. The project has been in talks for a while now and has been delayed several times.

However, at the end of 2018, it seemed a major step forward had been made: the land beneath the overhanging facade, which had been public property until then, got sold. At this point, it looked as though formalities were done with. But 2019 came around and still no trace of works. Neither was there any official news for us to chew. The only thing left then is for us to be patient and to daydream about the result. The only sure thing seems to be that the red color will not make its great comeback. Instead, the new facade should insist on a play of reflections. 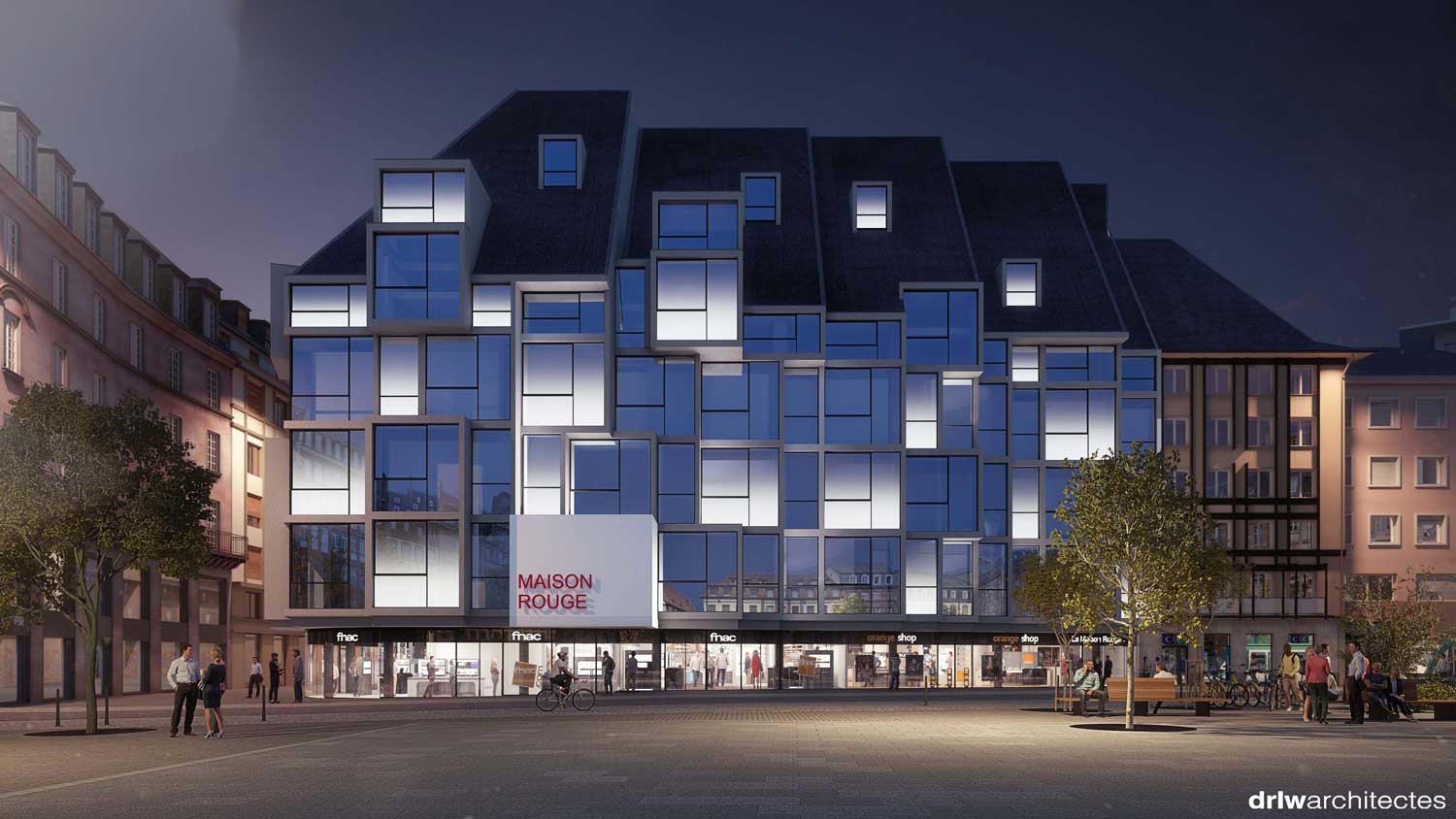 Given our Free Tours unfailingly pass by the Kléber square, you can count on me to keep my eyes peeled over the next few months (the next years ?). Or, maybe, you can simply get a guided tour and we’ll get the chance to ponder about it together in person 😉