Let’s talk a little about Alsatian houses, the half-timbered houses (maisons à colombage) also referred to in French as the houses with timber frame panels or studwork. This “colombage” allows us to add this monument to the five “C’s” of Alsace.. which, of course, work better in French : cathédrale (easy enough), choucroute (=sauerkraut), cigogne (=stork), coiffe (=headdress) and colombage (=half-timbering). 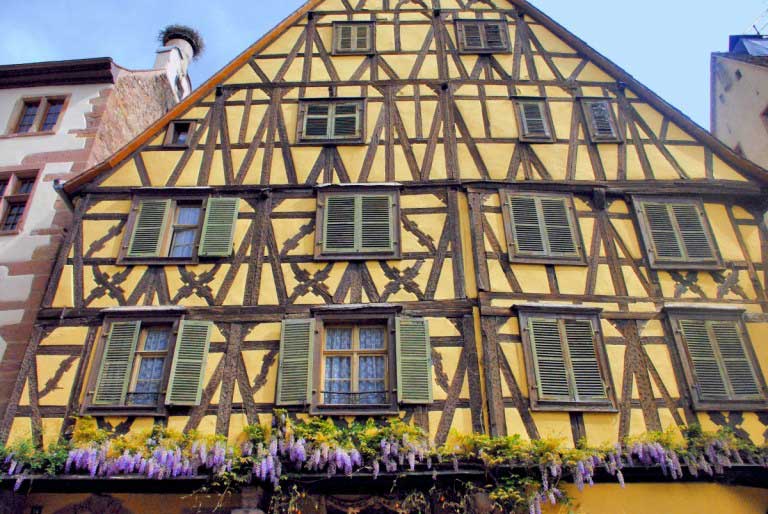 To begin with, why so many appellations? Let us start with the “timber frame panels” : it is simply the technical name, these constructions are made from timber frame panels, nothing but the obvious.
Then, “half-timbered” : this term is commonly used to designate a set of half-timbered frames. In French (colombage), it comes from the word colombe (a feminine name that can also designate the “dove” – a bird symbol of peace – but not in this case).
It is first found in 1334 with the sense of “door jamb” , “beam in a wall” and as a beam in a “structural joist”. It is then a doublet of the term “column” found as “columbe” in 1080. This – b- here is called an epenthetic one – I learned a word today 🙂 – and it’s linked to the difficulty of pronuncing the ‘mn’ group of classical Latin columna, “column”.

That said, I preferred the more romantic/funnier version (your choice) coming from German and saying that doves would perch onto these famous beams. Given that in German “pigeon” and “dove” are the same word (“Taube”), when we had to make the transition to French language, we preferred the pigeon’s white cousin, more in adequation to French romanticism… Yet it is true that you are more likely to find pigeons rather than doves on our houses today.
Then again, you can choose the version you like the most but keep in mind that one of them lacks some truth 😉 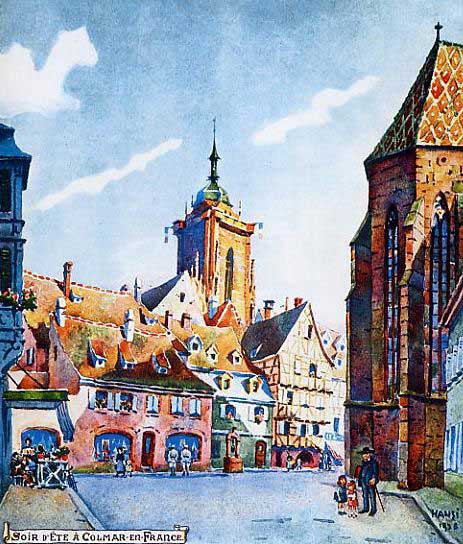 And finally, the name “Alsatian house” comes simply from the fact that it is (of course) the Alsatians who invented this architecture … Probably an effect of some “rest-of-France-imported” pride to my humble Alsatian opinion – this sentence is, indeed, perfectly contradictory, so what?

Where did this come from?

Okay then, but if we put our pride aside, where does such architecture come from? 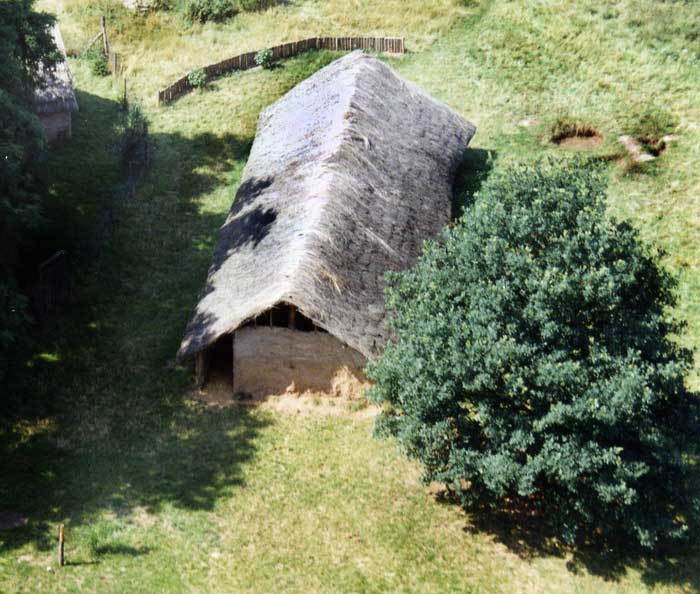 Its origin actually dates back to the dawn of time, no doubt to protohistoric times when huts with a wooden posts structure were built. Some such traces can be found in Alsace, for instance in Holtzheim where you will find a reconstruction of one such house from the Linear Pottery culture. That said, unfortunately you will not find any more examples of half-timbered houses dating from before the 15th century. Wars, fires, destruction, and also time, have unfortunately done their work and there are no more examples of what was the Alsatian house before that. And even though you will not find very old examples, you can find such architecture all over Europe, it is not in fact a specificity of our region…

That said, our beautiful Alsatian region still enjoys one of the highest concentrations of that type of architecture, even if you can find it pretty much all over Europe. And it is also here that you can see the most extravagant colors! Although these colors were not always the result of the owner’s tastes, on the contrary!
Firstly, you should know that white was the standard color, probably to make things easy – it’s always simpler than having to go look for the right pigments. But the colors also correspond to a fairly precise code: 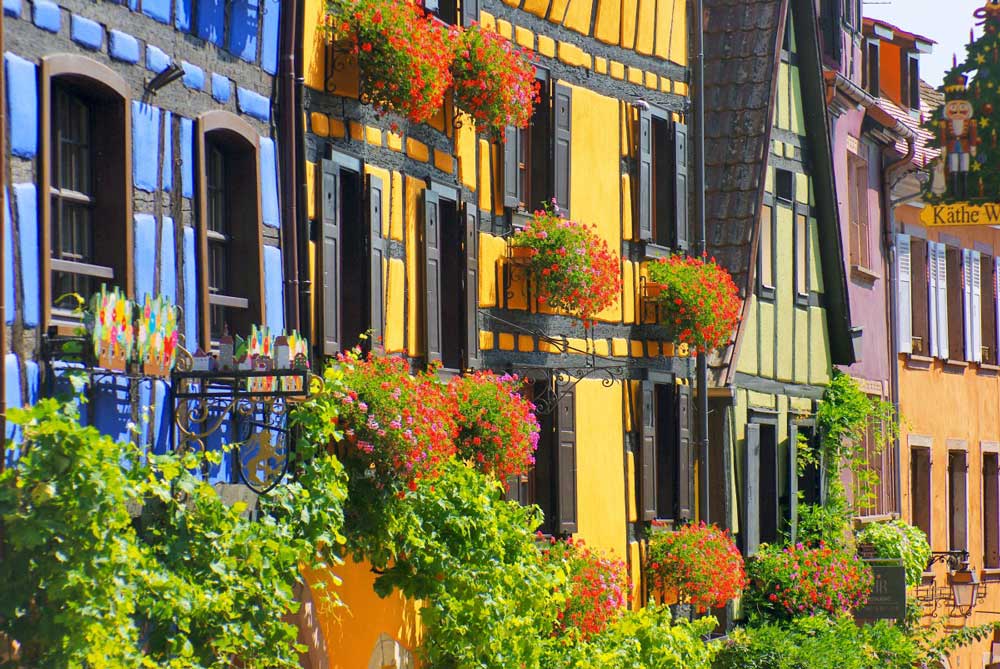 And some will also say that the colors blue and red concerned the Catholics and Protestants respectively.

Still, if today we find more colors in Alsace than in other regions, it is simply because the available choice is wider. So if you want to repaint your house in fuchsia pink, don’t hesitate! Although I don’t know if this color corresponds to anything other than your personal taste 😉

There is so much to say about these buildings, but it is too much for such a small blog post … So you will have to join our tours!
And since it’s summer and you may be on vacation, you can also take a day off to (re)discover the Alsatian Ecomuseum in Ungersheim, there you’ll see how these pretty houses are moved around… 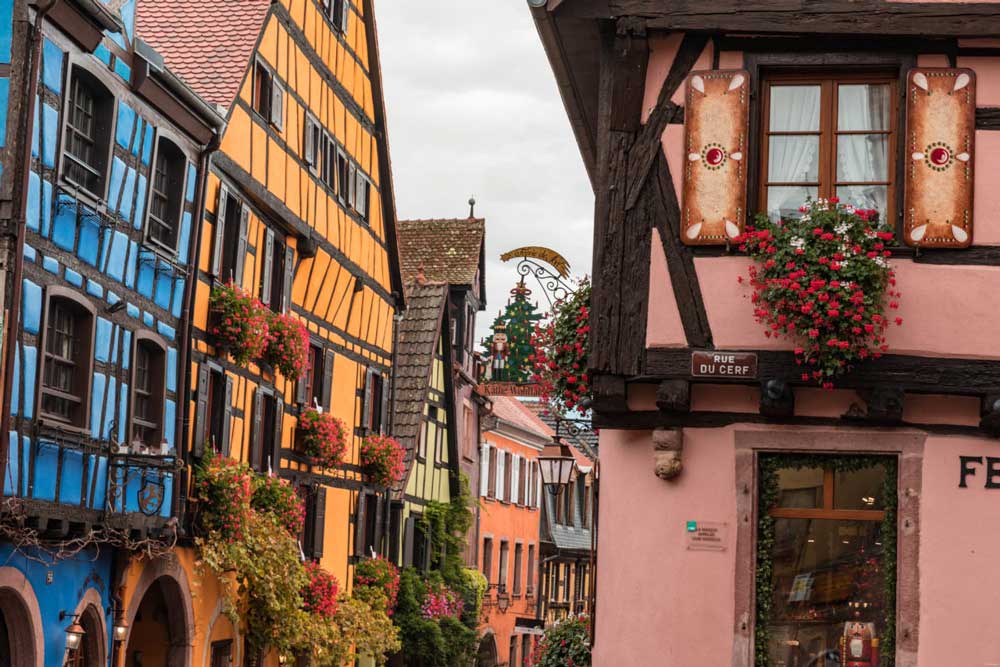